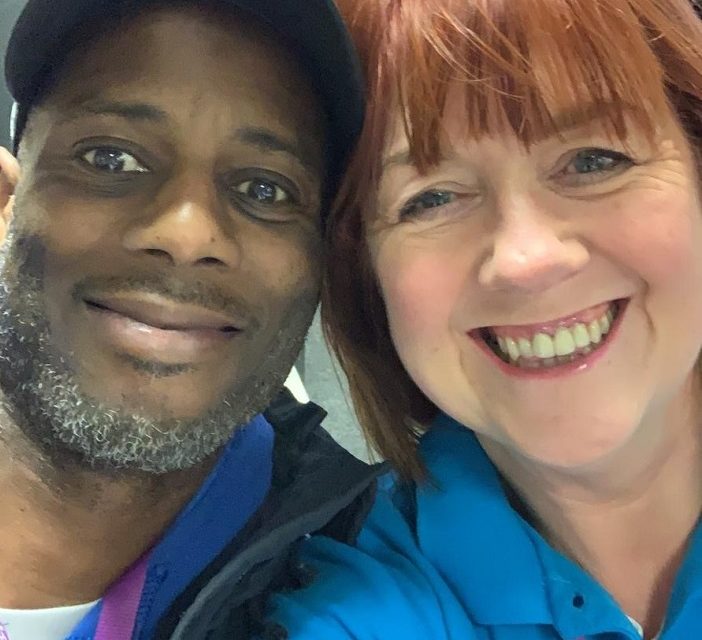 Beyond Recovery’s team has been enhanced by new project co-ordinator, Derrick Mason.  Derrick, who was formerly a Beyond Recovery apprentice, first joined the team to help mentor people in prison. However, his role has now been expanded to provide direct support to Jacqueline Hollows, founder of the social enterprise. Here is Derrick’s Beyond Recovery story.

Derrick first met Jacqueline when he signed up for Beyond Recovery’s programme in HMP Onley a few years ago, on the recommendation of another participant. Derrick’s motivation for taking the course was to gain extra credit at first, but he soon became intrigued by its content. In the very first session, Jacqueline told the group “If you finish this course without getting anything out of it, your life must be perfect!”. This resonated with Derrick, who thought: “Wow, my life is far from that”, and he instantly took the group more seriously.

Derrick was struck by how different Beyond Recovery’s programme was from other courses he had completed in prison. For a start, he wasn’t asked to write anything down! The conversation flowed in whatever direction it went; people talked about what was on their minds and how they saw things, real or otherwise. Derrick came to see his own habit of intellectualising everything and realised it was preventing him from truly understanding what the Beyond Recovery team was talking about. Once he learnt not do this, he had his first insight about how our minds really work.

Derrick says that Beyond Recovery changed his life completely. “It changed the way I looked at life in a big way at first. Then it started to filter into other parts of my life in smaller ways, which just grew and grew. Until one day, the big picture dropped. I saw that my thinking about my relationship with my mum, my partner, the people around me and with myself, is all connected. It changed my outlook on everything: what I could be, what I could do, what I could achieve.

“Beyond Recovery saved my life. And every day that goes by proves it more. I naturally deal with life’s disappointments much better. I used to hold onto my thoughts and suffer by myself, but now I share them with people. Since I’ve come out of prison, I’ve faced more challenges on a bigger scale, yet I’ve found myself reacting differently. My experience of life has been turned upside down. I can see the good in situations I would previously have thought were bad. And I can look at my real self and smile at the potential and the possibilities ahead of me.”

For around nine months after his release from Ford Open Prison, Derrick wasn’t in touch with Jacqueline or the Beyond Recovery team. But when he hit a low point in his personal life it occurred to him to make contact and Jacqueline responded. During their their conversation, she mentioned that the Three Principles Conference was coming up and suggested that Derrick should go along. He did so, taking his partner, Nikki, with him. She was intrigued by the instant change she saw in Derrick after his conversation with Jacqueline. “I remember coming off the phone and saying to Nikki: ‘I don’t want to argue with you anymore’. As simple as that.”

Once at the conference, Derrick was invited to stand in for a speaker who couldn’t attend. Despite feeling nervous, he went ahead and did it. Afterwards, lots of people came up to him and told him how well he had spoken, and he realised that he had really enjoyed it. Then Jacqueline asked him to speak at another event. “The way I felt after speaking was like nothing I’d ever experienced before. I realised that all my life I had told myself I didn’t like speaking in front of people – that I could never speak in public as I’m just not that type of person.’ But it was just another untrue label I had put on myself. After that I started going to all the Beyond Recovery Academy meetings with others who had been released from prison.”

Becoming part of the team

When the Beyond Recovery team had an opportunity to deliver a knife crime programme at HMP Nottingham, Jacqueline invited Derrick to do one-to-one mentoring with some of the guys. Derrick jumped at the chance and, as with the Three Principles conference, it felt amazing to be giving back and seeing the possibilities that were out there for him. Jacqueline saw his potential and soon offered him a part time job. Derrick believes that Jacqueline’s belief in him shone a light on his abilities and his natural course towards giving back.

“Jacqueline has thrown a range of tasks my way, that I just seem to be adapting to and enjoying so much. I am helping her to drive the company forward. Because I know how much passion, energy and love she puts into the company, the kind of trust she has in me feels amazing.” “So far nothing has been out of my reach, at least nothing that an internet search won’t get over! So, things that I would probably have said “I can’t do” before, I’m doing and enjoying. This understanding has shown me that you have to grasp opportunities with both hands and my new role means everything to me.”

Derrick particularly loves mentoring people. “Speaking to the lads, seeing transformations in them… signs that they’re seeing something totally different. You see them start to grow, smile and have a little bounce in their step. And I can see that in me too. It’s amazing and beautiful. When they look at me – somebody who has been through what they’ve been through – there’s some inspiration. They realise that they can be what they want to be and that alone makes me feel worthy, wanting to get up in the morning and go to work.”

There is no doubt that Beyond Recovery’s team has been enhanced by Derrick’s presence. In the future Derrick would like to help Beyond Recovery to get into as many prisons as possible and to impact many more people.  “I just wish for Beyond Recovery to shine a light on as many of the prison population as possible and to have a long lasting, positive impact. Not just when they are inside, but when they come out and for the rest of their lives”. “I do have ups and downs and I do struggle sometimes, but I am learning every day that it’s the joy of the journey that is important, not the destination”. And, while the goal is to reach as many people as possible, if I just reach once person, then I’ll be happy.”